Spotted in Disneyland, Mercedes-Benz S-Class Fit for the Phantom Manor

If you’ve got doubts about the specs of this car, don’t worry. It’s not you, it’s them. Whoever decided to turn it into such a confusing mind-boggling gob-smacking puzzle of a car. We have written about it before and this time it was spotted in Disneyland. It looks like it’s right out of the parking lot of the Phantom Manor.

The Mercedes-Benz S-Class has always been a representation of elegance and exclusivity. Well, this particular S-Class threw those to the wind and ran amok. It is nothing of what it was the moment it rolled off the assembly line in Germany. 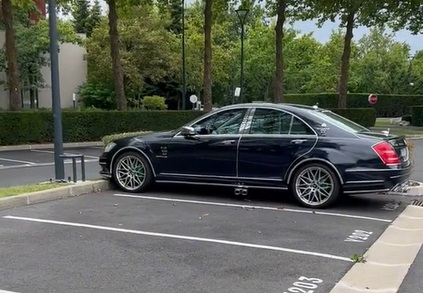 Back in January, we only had a photo from the rear-left side and could spot the boot lid covered in logos and no less than ten exhaust pipes, plus the misspelled license plate. This time we’re getting a TikTok video straight from a parking lot in Disneyland, France. And we get to see just about everything. It’s obviously eye-damaging!

There are green brake calipers and the front wing displays the “V12”, “900”, “6.3” and “AMG” numbers and letters. This time we get to see the front end as well, which is just as confusing as the rear. There is a Maybach logo on the hood and the AMG lettering right under the left headlight. The radiator grille with what seems to be a simple metal plate copying the ADAS sensors and cameras support, is right behind the three-pointed star badge. An S 63 lettering could not have missed the party.

The rear pillar displays “Rocket”, but because the author of this contraption spotted in Disneyland must have been lacking a “C”, they put a “U” instead.

And as you may have already found out from our previous article, when we shared a Reddit post, the car proudly and kitsch-ly displays the “S 63”, “Brabus” and “V12” codes s on the boot lid as well. And the F word on the license plate. No, not that one!