Mercedes’ best-selling model of the last two years is moving to a new generation. The second generation Mercedes GLC is available with three Plug-In Hybrid versions and with the new integral steering.

Launched in 2015 as the successor to the Mercedes GLK, the Mercedes GLC has been the best-selling Mercedes model for the past two years beating even the C-Class limousine.

The Mercedes GLC comes standard with classic steel spring suspension but unlike the C-Class, it is available with optional air suspension Airmatic. It is available with the Engineering package along with integral steering. Due to the large capacity battery that weighs quite a lot, Plug-in Hybrid versions are standard equipped with air suspension with automatic level control at the rear axle. Another option is the Offroad Engineering package, which includes a 20 mm higher ground clearance and underbody protection at the front. 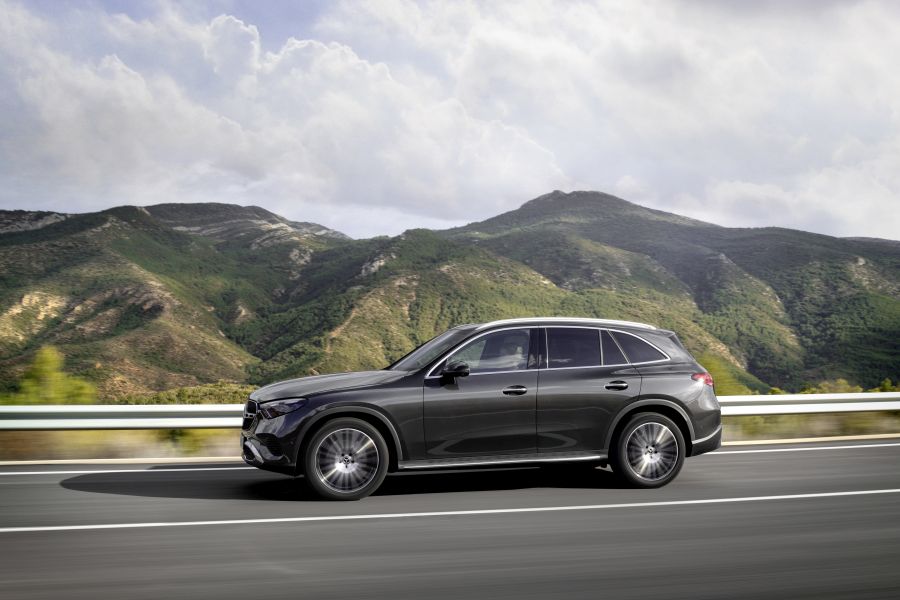 Layout from the C-Class with 11.9 inch multimedia screen as standard

The dashboard includes two standard displays: a 12.3-inch display for the instrument panel and an 11.9-inch display for the multimedia system. Three display styles – classic, sporty, discreet – are offered as with other Mercedes models, each with three modes – navigation, assistance, service. In addition, the Mercedes GLC has an off-road mode. An optional 800 x 400 pixel resolution colour head-up display is available, which displays information virtually on a 23 x 8 cm display 3 metres in front of the car. 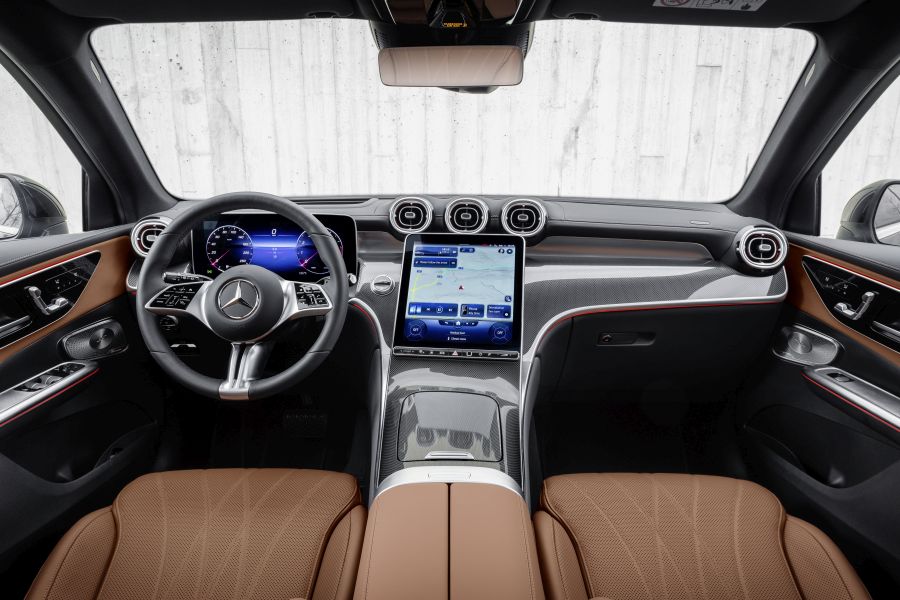 31.2 kWh battery which can be charged at DC stations

On Plug-In Hybrid versions the driver can choose between Battery Hold and Electric modes. Battery Hold allows you to conserve battery power for later use. Unlike the old model, the battery can no longer be recharged during drive using the heat engine. With a very large capacity of 31.2 kWh, it is not efficient to charge the battery using the heat engine as consumption increases greatly.
The battery can be charged at standard AC stations up to 11 kW or optionally at DC stations up to 60 kW in only 30 minutes.
The Mercedes GLC can run electrically up to 140 km/h. As with other Mercedes models, there is a pressure point on the accelerator pedal stroke that marks the start of the thermal engine.

The rear seat backrests can be adjusted in the cargo position to an angle of only 10 degrees from vertical. If the Load Comfort package is ordered, the rear seat backrests can be electrically folded down as well as the load compartment roller blind. Electrically operated tailgate is standard.
The Mercedes GLC comes standard with the Avantgarde Line exterior package. Optional AMG Line is available.

The Mercedes GLC has new assistance systems with new features:
– Active Distance Assist Distronic adaptive cruise control now reacts to cars stopped on the road at speeds of up to 100 km/h (60 km/h before)
– Lane assist with active steering correction works up to 210 km/h and detects the lane using a 360-degree camera.
– new Parking package with 360 degree camera comes with transparent bonnet

Mercedes GLC will be produced at the Bremen plant like the previous generation but also at Sindelfingen and Beijing. The battery for the Plug-In hybrid versions are supplied by the Mercedes Bruhl factory.

Mercedes-AMG One general inspection costs up to 850,000 euros