Mercedes-AMG Reveals the GT3 Edition 55. No, You Can’t Drive It

Mercedes-AMG takes the curtain of the GT3 Edition 55 in the AMG’s anniversary year. But it is not exactly your daily driver. The ultra-exclusive model will roll off the assembly lines in only five units.

Mercedes-AMG will be building this racer by hand in Affalterbach, Germany, and will be equipping it with unique technical characteristics. The car got a performance exhaust system signed by Inconel and is sporting a silencer for a special soundtrack.

The GT3 Edition 55 displays a body in MANUFAKTUR alpine gri uni with contrasting red accents and aero components in carbon. The 55-year anniversary logo shows up on the rear wing, in the vicinity of the AMG logo. 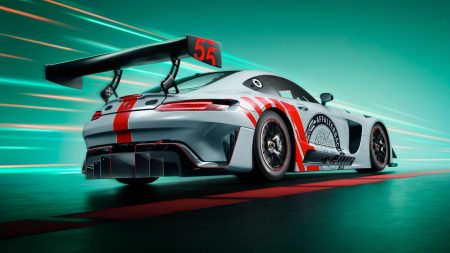 The “Edition 55 – 1 of 5” plaque is on display in the cockpit, on the center console, and the carbon seat. Mercedes-AMG chose matte Anthracite metallic for most of the cabin, while the seat belts come with silver accents. There is a latest-gen Bosch Data Display Unit (DDU) on board, showing relevant info such as speed, engine speed, operating temperatures, lap times, gear and shift indication.

Everything about the Mercedes-AMG GT3 Edition 55 is in the name of racing. It is not FIA-homologated and can therefore get even more engine power. The 6.3-liter V8 engine rolls to the tarmac 650 PS (641 HP). That is 100 PS (98 HP) more than the FIA-homologated version.

Mercedes has already put a price tag for all this performance. That would be €625,000, VAT not included. But it includes an IWC Schaffhausen time piece. It’s the limited edition Pilot’s Watch Chronograph Edition AMG. The watch displays the chassis number corresponding to the Mercedes-AMG GT3 Edition 55 on the back case, which is made of grade 5 titanium.

Matt Watson Drives the Mercedes-AMG GT One at Nurburgring