The Mercedes-AMG One Formula 1 street car is finally ready after many delays totalling almost 3 years. It develops 1063 HP and costs 2.75 million euros plus taxes.

Ola Kallenius, Mercedes boss, was very honest when he said “I think we were drunk when we approved this project”. The Mercedes-AMG One was supposed to hit the market in autumn 2019 but adapting the F1 engine to increasingly tough emissions rules and to the idle speed of a “civilian” engine raised some hurdles that seemed insurmountable at the time.

275 customers paid the deposit waiting for the 2.75 million euro plus taxes supercar. Among the customers: real estate mogul Many Khoshbin, Formula 1 drivers David Coulthard and Nico Rosberg, actor Mark Wahlberg and former tennis player Ion Țiriac who even wanted to buy two pieces. All of them has to expect more than 3 years to get the car.

Here’s a closer look at the powertrain configuration
– The single turbine V6 electrically driven engine corresponds to the current F1 engine. It has four camshafts controlled by spur gears. Also, to cope with high revs, the valves are actuated by pneumatic springs. The thermal engine develops 574 HP at 9000 rpm (11,000 maximum revs).
– An electric motor similar to Formula 1’s MGU-H (Motor Generator Unit Heat) of 90 kW placed between the exhaust gas turbine and the compressor turbine, directly on the turbine shaft. This is designed to accelerate the compressor turbine up to 100,000 rpm before the exhaust gas reaches the turbine. This completely cancels turbo lag and engine response is instantaneous. Maximum boost pressure is 3.5 bar.
– A second electric motor similar to the F1’s MGU-K (Motor Generator Unit Kinetic) of 120 kW, which as its name suggests also has a propulsion role, being connected directly to the crankshaft of the V6 engine via a spur gear system. This motor is powered by a high voltage Li-Ion battery.
– two front electric motors powered by the same Li-Ion battery, each driving the front left and right wheels separately and each delivering 120 kW at 50,000 rpm.
Total power output of the assembly is 1063 HP.

The 8.4 kWh battery uses the same technology as the F1 car and gives an electric range of 18.1 km. It can only be charged at AC stations with up to 3.7 kW. The electric range is quite low, this solution being chosen more for low emissions than for practicality. Because that electric range is not even enough to get from the suburbs to the centre of the world’s major metropolises. Mercedes has limited the battery capacity in order to not increase the kerbweight of the car, which should have remained as low as possible.

Engineers at Mercedes have found a solution to reduce emissions.
The car starts in electric mode with electric motors on the front axle. During this operation,  the catalytic converters are preheated and the engine does not start until the correct temperature is reached in the catalytic converters.
Six drive modes are available:
– Race Safe – standard program with electric start and hybrid on demand. The thermal engine only starts when high power is needed.
– Race: hybrid mode in which the thermal engine runs continuously to charge the battery and always have the full power of the electric motors available.
– EV – pure electric operation
– Race Plus: track-only, active aerodynamics, suspension lowered by 37 mm at the front and 30 mm at the rear
-Strat 2: also exclusively for the track, suspension lowered like Race Plus but even firmer. Maximum power as in F1 qualifying.
– Individual: same as individual modes in street cars.

With Race Start (Launch Control) mode you reach 200 km/h in just 7 seconds in Race, Race Plus and Strat 2 modes.

The V6 engine is mated to a completely new 7-speed automated  manual gearbox, developed especially for the Mercedes-AMG One, in which the lockable differential is also integrated.

As with the F1 car, the body is a carbon fibre monocoque and the suspension is a push-rod multilink. At each axle there are five links and two adjustable suspension struts. The adaptive suspension allows a choice of settings: Comfort (C) and Sport (S) in EV, Race Safe, Race and Individual mode and Sport (S) and Sport+ (S+) in Race Plus and Strat 2.

How does it all work? The driver can choose between three aerodynamic settings:
– Highway in Race Safe, Race, EV and Individual. The louvres are closed, the active front diffuser flaps are extended and the spoiler is integrated into the bodywork.
– Track in Race Plus and Strat 2. In this case the front diffuser flaps fold up, the spoiler is fully raised, the louvres are open to increase downforce at the front axle and the suspension is lowered by 37 mm at the front and 30 mm at the rear. This increases downforce by up to 5 times compared to the Highway.
– Race DRS similar to F1 that can be activated from a button

Access to the interior is via doors that rise diagonally forward. The fuel nozzle is on the right and the charging socket is on the left. Carbon fibre is visible everywhere. The AMG Motorsport seat backrests can be adjusted to two angles: 25 or 30 degrees. The steering wheel is electrically adjustable and the pedals are adjustable in 11 positions. The footrest is also adjustable.
The centre tunnel is minimal with a start/stop button at the front. There are also two mini USB sockets. The driver has two 10-inch displays, one for the instrument cluster and one for the multi-media system which is driver oriented. The steering wheel is F1-inspired with the LED bar for the rev limiter at the top and the DRS button on the top left. 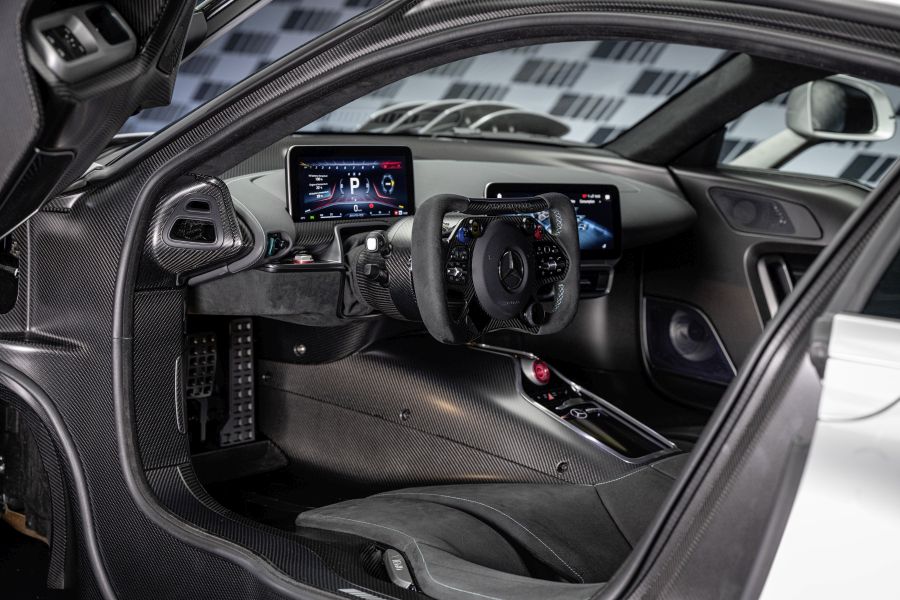 The technology is impressive and approaches that of F1 without compromise. Mercedes does not announce anything about the maintenance of the V6 engine and if the engine has to be rebuilt after 50,000 km as was initially reported. By the fact that the engine does not start until the catalytic converters reach the desired temperature it seems that Mercedes has solved the problem with emissions. The electric range of 18.1 km is very low but the PHEV system has ensured a low consumption of 8.7 km/100 on paper according to WLTP rules.
The question remains whether Mercedes-AMG One will surpass the 135 million euro collector’s value reached few days ago by the Mercedes 300 SLR Uhlenhaut coupe. We think not because the number of examples is higher, 275 compared to only two for the 300 SLR and it is hard to believe that this sophisticated high-revving engine will be as reliable as the inline 8-cylinder engine of the 300 SLR.