Lewis Hamilton and George Russell, Up on the Podium Again

Mercedes-AMG Petronas is signing off with a bang. Right before going into the four-week holiday, the team put both of their drivers up on the podium once again. Lewis Hamilton finished second, with George Russell finishing third. It was, of course, Max Verstappen’s race in the end.

George Russell had got his first pole on Saturday after a fabulous drive. But he was unable to convert that into a win, as his soft-medium-medium strategy send him straight to P3. At the start, the Briton managed to hold off Sainz. Meanwhile, starting from the sixth position on the grid, Hamilton charged past the two Alpines. From P10, Max Verstappen had just started his show. By Lap 7, the Dutch had already advanced to P6, tailing Lewis Hamilton. But Hamilton managed to go round the inside in Turn 1 of Lap 12 and overtake Lando Norris, leaving Max in P6. 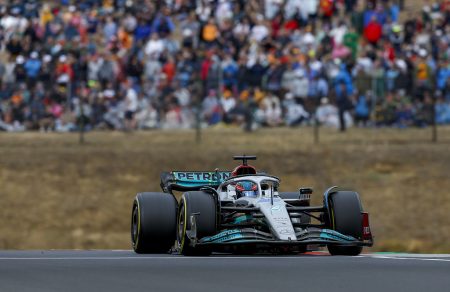 From that moment on, Verstappen started to complain using some pretty colorful language. Russell switched to mediums and returned to the racetrack in time to battle Alonso. It was an easy mission for the Mercedes driver. On the same tire, Ferrari’s Carlos Sainz cleared off Ocon to chase Russell. Meanwhile, Charles Leclerc was in the lead, more than 11 seconds ahead of Hamilton and another 7 seconds ahead of Russell. Hamilton stopped on Lap 20 and went back in in P7. Verstappen, also on mediums, got away, clearing Alonso and Ocon as well.

With Leclerc in the pits, George Russell was once again in the lead, but not for long. The Monegasque turned up the pace and got in a wheel-to-wheel duel in Lap 28. With a late braking in Turn 1, Leclerc eventually managed to get into P1 on Lap 31. Sainz and Verstappen were also closing in on Russell. 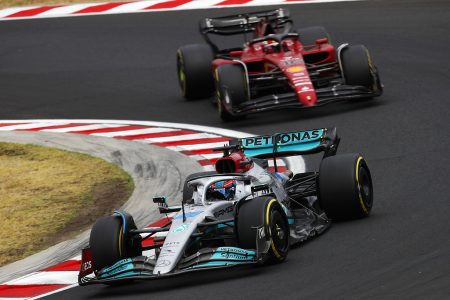 Red Bull called Max Verstappen in again for a new set of mediums. And it turned out it was just the right strategy. Leclerc pitted for hards, hoping to stay out on the racetrack all the way to the end. Russell was on mediums, just like Verstappen, who was now ahead of him and closing in on Leclerc. Turn 1 of Lap 41 put the Dutchman ahead of a Leclerc who was still trying to warm up his tires.

But Verstappen was already dreaming of a win when he got on the throttle and spun 360 degrees, going right behind Leclerc, but denying Russell’s chance. On Lap 45, the Red Bull driver got back in the lead.

Lewis Hamilton was charging from behind, cutting the 12-second gap from Sainz bit by bit. The Briton put on the softs on Lap 5. Sainz was way behind, after a slow pit stop, so Hamilton only had to take advantage of the yellow flags following the collision between Lance Stroll and Daniel Ricciardo. 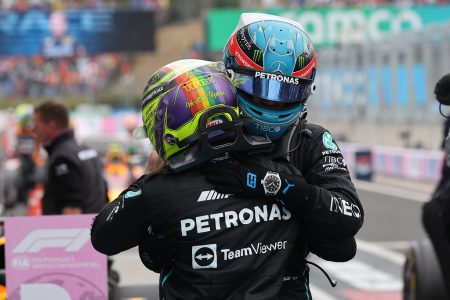 Russell made his move on Leclerc, a sitting duck on hards, on Lap 54 and got into P2, starting his hunt on Verstappen, who enjoyed an 8-second lead. But Hamilton was the fastest man on the racetrack, passing both Sainz and teammate Russell and taking a chance on Verstappen. But he was running out of laps so he had to settle for the P2.

The race ended with green flags on, after the Virtual Safety Car was deployed following Valtteri Bottas’ loss of power. Max Verstappen won once again, benefitting from one more lame show of Ferrari. So did Mercedes, putting Lewis Hamilton second and George Russell third. Max now holds an 80-point lead in the driver’s standings.

Formula 1 will resume in four weeks’ time with the Belgian Grand Prix.

10 Years Of Deliberate Actions On Public Education – So How Many Vacancies Does You System Have?