The Beyhive is buzzing at full throttle in anticipation of Beyoncé’s new album, Renaissance, which drops on Friday, July 29.

While fans hare having difficulty hiding their excitement about new music from Queen Bey, one person who’s far from thrilled is Kelis.

As TMZ reports, the reason is that a track on the LP, titled “Energy,” reportedly uses a sample from Kelis’ track “Get Along With You”, from her 1999 debut album.

In a series of comments to a post from an Instagram, Kelis insists that she had no idea her song was going to be sampled, and is offended that she wasn’t asked first.

“My mind is blown too because the level of disrespect and utter ignorance of all 3 parties involved is astounding,” she wrote, referencing Beyoncé and the song’s other credited composers, Pharrell Williams and Chad (assumed to be Williams’ Neptunes bandmate Chad Hugo; the Neptunes produced Kelis’ first album).

According to Kelis, she wasn’t told that her song was going to be sampled.

“I heard about this the same way everyone else did. Nothing is ever as it seems, some of the people in this business have no soul or integrity and they have everyone fooled,” she added. 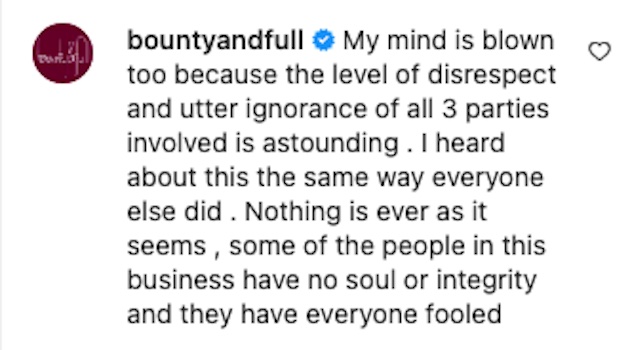 Kelis continued in additional comments, responding to a fan claiming that “Beyoncé really admire [sic] Kelis” by writing, “Admire is not the word.”

When another comment described “Energy” as “a collab the world really needs,” Kelis fired back, “it’s not a collab it’s theft.”

Selena Gomez Tearfully Thanks Fans For ‘Growing Up With Me’