Jena Frumes is opening up about her split from Jason Derulo, indicating it was his cheating that was to blame.

Frumes and Derulo — who share 13-month-old son Jason — broke up last year, but reconciliation rumours were sparked when the two were seen riding jet skis together last month.

However, Frumes made it clear that rekindling the romance was out of the question in some social media posts she issued, claiming that Derulo “disrespected and cheated on” her.

Taking to Instagram Story, she shared a comment from one of her followers who stated, “You’re not married which means your child is a bastard and you’re playing the w—e role – Ya’ll got morals mixed up.”

She also shared her response. “I wouldn’t call myself a w—e,” she fired back. “It’s unfortunate my situation didn’t work out because we once did aspire to be married but maybe it’s best to be single than to be in a relationship & constantly be disrespected & cheated on and lied to. Or is it better to stay & be quiet so people like you…approve?”

In another post, she shared even more detail about what went wrong.

“If a man wants a different girl every week over his family I’ll never accept that…we will never be able to make it work ‘happily.’ I was straight up told that I should ‘turn the other cheek.’ I’ll never be OK with sharing a lover that I love with all my heart!!!” she wrote.

“If the streets come first I can’t change that so stop blaming the women like we chose the single mother life,” Frumes continued. “That s**t is hella annoying. You don’t know what women go through to try & ‘make it work.’ It was never about money or dating someone famous…I was in love & we planned a baby & life together! It didn’t work out and life must go on. Leave me alone.” 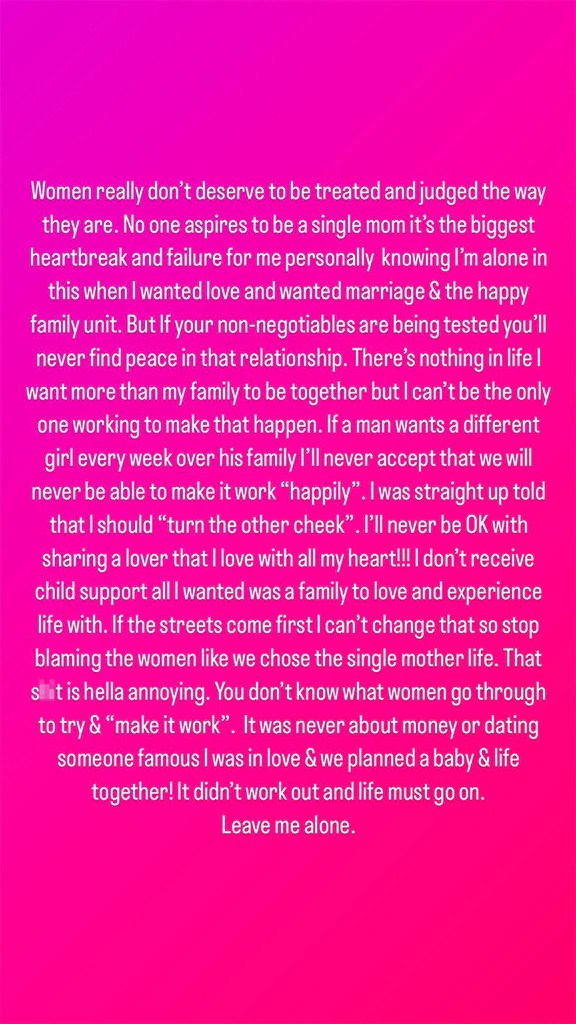