It is Worth Buying The Hyperscreen? Here is what we think

When Gorden Wagener, Mercedes’ chief designer, unveiled the new Hyperscreen, everyone was fascinated by Mercedes’ innovation. But is it worth buying this screen that costs 8568 euros extra on models where it is not offered as standard?

The Hyperscreen is standard on the EQS 580 4Matic and AMG-EQS 53 AMG and costs extra on the other EQS versions and the entire EQE range including the AMG versions.

Mercedes has touted the Hyperscreen as the largest in the industry with a width of 1.41 metres and a surface area of 2,432.11 cm2. But in fact it is incorrect to say that it is 1.41 metres wide because there are three screens grouped under the protective glass and not only one screen. The instrument cluster display has 12.3 inches as in the S-Class and the front passenger touchscreen has the same 12.3-inch diagonal. The central multimedia touchscreen has a format close to 16:9, is slightly curved and has a diagonal of 17.7 inches.

The Mercedes S-Class has a central touchscreen display in portrait format with a diagonal of 12.8 inches and tilted at an optimal angle to the vertical.

These are the figures. We want to see which of the two screens has better resolution and which is easier to operate. 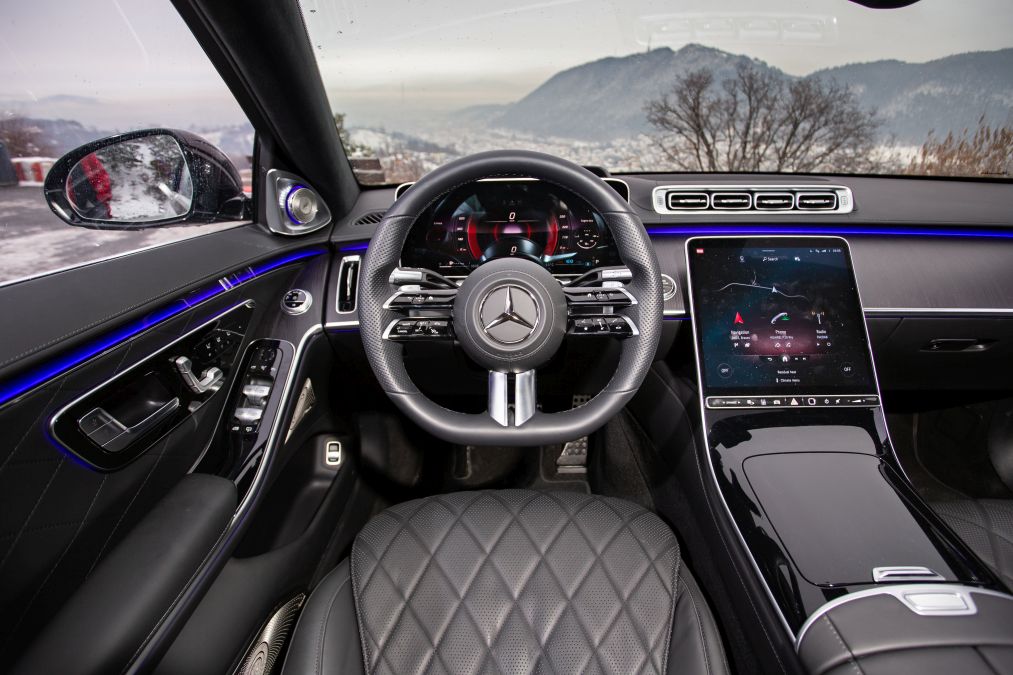 Mercedes says both center screens use OLED technology. But in our tests with the Mercedes S 500 4Matic and EQS 580 4Matic we noticed that the portrait screen on the S-Class has better contrast and is brighter. We also found the portrait screen to have better resolution. This assessment is subjective because Mercedes does not communicate the pixel resolution of the screens. Also, the impression of resolution may be influenced by the glass covering the Hyperscreen.

Mercedes says that the large glass cover display is curved three-dimensionally in the moulding process at temperatures of approx. 650°C. This process allows a distortion-free view of the display unit across the entire width of the vehicle, irrespective of the display cover radius. All displays are transparently bonded to the cover glass for a uniform refractive index curve to avoid reflections as much as possible. The central and front passenger displays are optically connected to the cover glass under vacuum.

The vacuum technology is designed to eliminate any impurities or air bubbles between the glass and the display. Although the large glass cover display is curved at high temperatures to eliminate any distortion, our impression is that the Hyperscreen centre screen lacks the exceptional clarity of the S-Class portrait display.

Portrait display in S-Class: looks better and has more practical proportions
Design judgements are also subjective. The MBUX Hyperscreen is surrounded only by a thin silver shadow frame, a vent band and a narrow leather frame. The S-Class portrait screen has a thicker chrome frame and its angled position gives it a sleeker and more practical look. The S-Class portrait screen is closer to the user and the portrait shape allows better menu organisation. 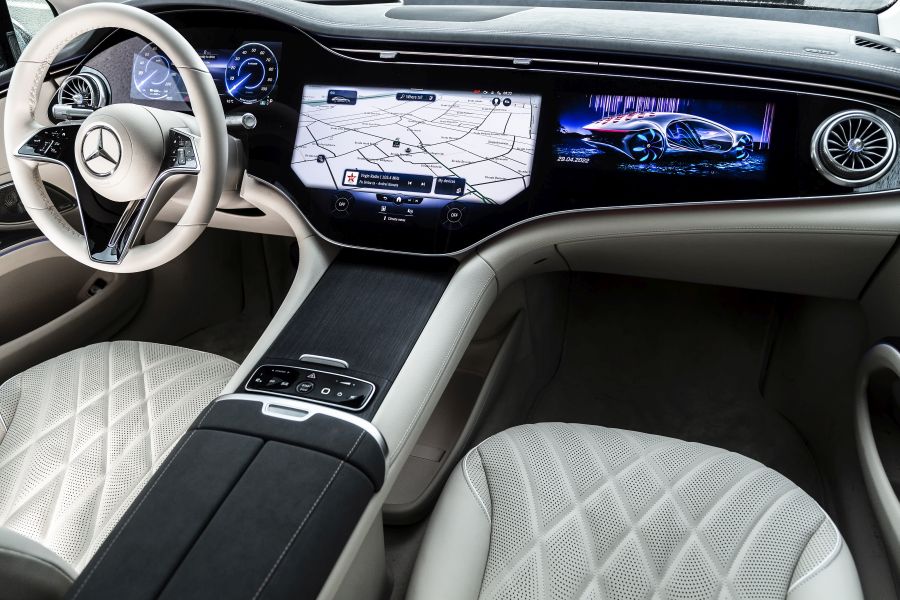 Equally smooth operation in both cases
In both cases, the menus are very logical and excellently organised. The climate controls are always at the bottom of the screens which makes operation easier. The Hyperscreen uses zero layer technology. What does zero layer mean? To get to the most important applications, the user must scroll through ZERO menu levels. This technology allows direct access to the most important applications, but we didn’t miss it in the S-Class.

The haptic feedback from the Hyperscreen is also a plus but it makes no substantial difference to the tactile operation of the S-Class.

Price makes the difference
The Hyperscreen costs an extra 8,568 euros on most EQS models except the EQS 580 and AMG EQS 53 and the entire EQE range whereas the portrait screen is standard on both the S-Class, the EQS and EQE. It’s obvious that this price difference doesn’t translate into superior quality.

Conclusion:
Our advice: it’s not worth opting for the Hyperscreen. What is worth it is the head-up display with augmented reality which costs 2,380 euros for the EQS and 3796.10 euros for the S-Class. The S-Class is also the only one where you can order instrument cluster in 3D format that offers great graphics.

Nick Cannon: ‘I Will Never Have A Love Like I Did’ With Mariah Carey