Barbie Ferreira is closing the door on “Euphoria”.

The 25-year-old actress, who played Kat Hernandez on the first two seasons of the HBO teen drama, announced on her Instagram Story Wednesday she would not be returning for the upcoming third season.

“After four years of getting to embody the most special and enigmatic character Kat, I’m having to say a very teary-eyed goodbye,” Ferreira wrote. “I hope many of you could see yourself in her like I did and that she brought you joy to see her journey into the character she is today.”

“I put all my care and love into her and I hope you guys could feel it,” she continued, before she ended her announcement with a sweet message to her character. “Love you Katherine Hernandez.” 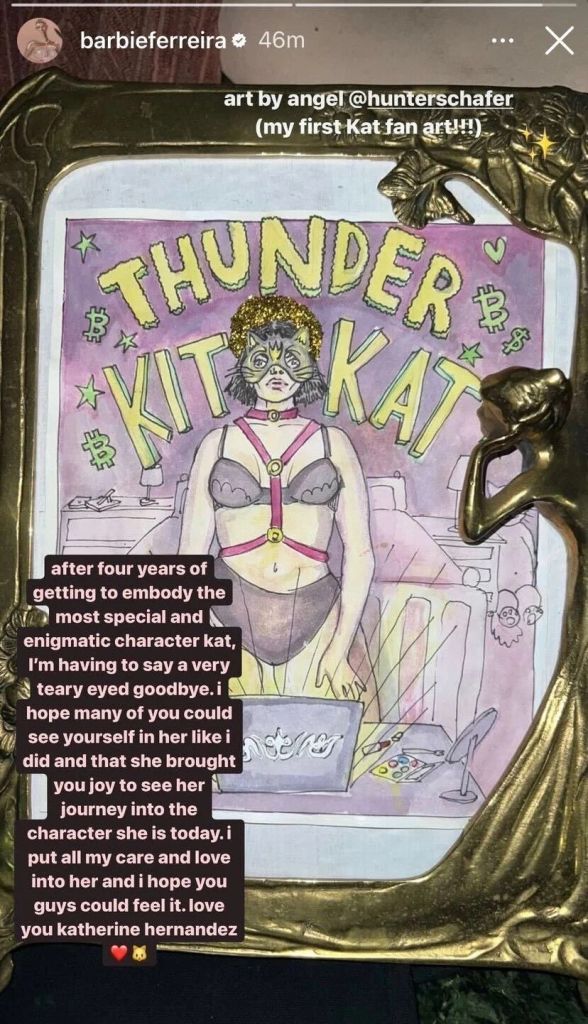 Ferreira saw her screen time significantly diminished in season 2, which aired its finale in February, compared to season 1. The freshman season saw Kat, a high school student who explores her sexuality by starring in her own online videos, eventually starting to date classmate Ethan Daley (Austin Abrams). The second season had Kat seemingly going against the progress she made as she struggled with her body image and ended up gaslighting Ethan into breaking up with her.

There had been speculation that Ferreira and series creator Sam Levinson had a falling out on set, The Daily Beast reported.

Ferreira directly addressed the rumours head-on in an interview following the end of season 2. “I’ve seen so many different things and a lot of it is untrue and some of it’s kind of like mundane little things,” she told Insider.

Ferreira spoke to ET’s Denny Directo in April during an Emmy FYC event for “Euphoria” about theories surrounding Kat’s reduced presence in season 2. “There’s a huge cast,” she said. “So, we’ll see everyone. Everyone gets their time.”

At the time, Ferreira said fans would “have to tune in to find out” what’s in store for Kat in season 3, adding, “I don’t want to give too much away.” Asked who the actress wanted to share more screen time with, she said, “I actually would love to have scenes with Maude [Apatow]. I think Lexi and Kat would be a cool little duo.”

Barbie Ferreira on ‘Euphoria’ Season 2, Fame and Dating in Hollywood

What If Teachers Only Worked The Hours They Were Contracted For?